Evaporation technology is used in any process that requires concentration of a stream by removal of water or other solvent. The process of evaporation is energy-intensive; any evaporator system design approach needs to take great consideration into the heat recovery philosophy and overall utility usage of the final system design. Product characteristics also need to be considered in the system design; many product characteristics can be altered in an evaporation process, especially in a Food and Beverage application.

Evaporators are used across an array of industries, such as:

Some of the specific applications within these industries that use evaporation systems include:

There are several varieties of evaporator designs commonly used throughout different industry sectors. The selection of the appropriate design is based on many factors that consider the efficiency of the system and the appropriate use of a specific evaporator type to maintain final required product characteristics.

The two main technologies used in an evaporator design by Thermal Kinetics include:

Tubular Evaporators: A shell and tube heat exchanger is used to drive the evaporation process. The specific detailed design of the shell and tube results in a variety of evaporator system configurations that include:

Plate Evaporators: As the name suggests, a plate evaporator uses a plate heat exchanger in the system design to drive the evaporation process. It offers several benefits over a tubular design.

A plate evaporator can be designed in the same system configurations listed above for tubular evaporators. The increase in the efficiency of heat transfer is especially useful when processing viscous fluids. The plate configuration has also proven superior in processes where foaming is an issue.

Care needs to be taken in fouling applications due to the small gap used between heat exchanger plates. The use of plate evaporators must be carefully chosen as some problems can arise in the case of mineral fouling and corrosive service.

One corrosive service that is known to be a great problem is using plates for caustic soda evaporation in nickel plates. The hydraulic forces cause rubbing at the plate contact points removing the protective oxide layer and resulting in quick corrosion of the plates.

Forced circulation evaporators use a high rate of recirculation within the heat exchanger and separation vessel. This type of evaporator is most suitable for applications with viscous solutions or high fouling products (the accumulation of deposits on the heat transfer surface area that inhibit proper heat exchange from the utility to the process).

The fluid that is recirculated is continually heated above the saturation pressure in the separator and flashes into the vessel forming the process vapor. A forced circulation evaporator is commonly used in crystallizer designs. 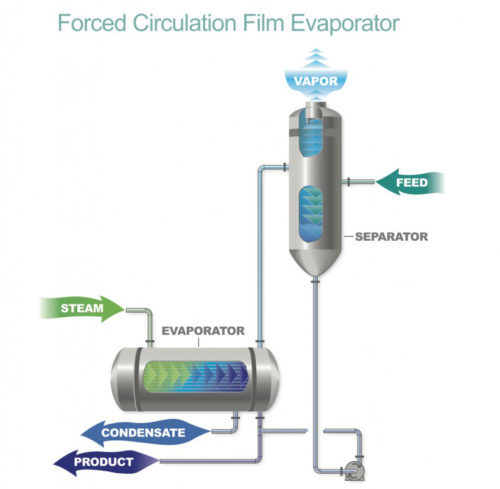 The feed fluid is introduced into the system and is recirculated and heated to the boiling point. Over time the product is gradually concentrated in the system until the required concentration and crystal size parameters are achieved.

The size of the crystal is a function of the residence time (RT) allowable by the size of the vessel. It is desirable to run a testing protocol in the design phase to determine the optimum RT associated with the desired crystal size. 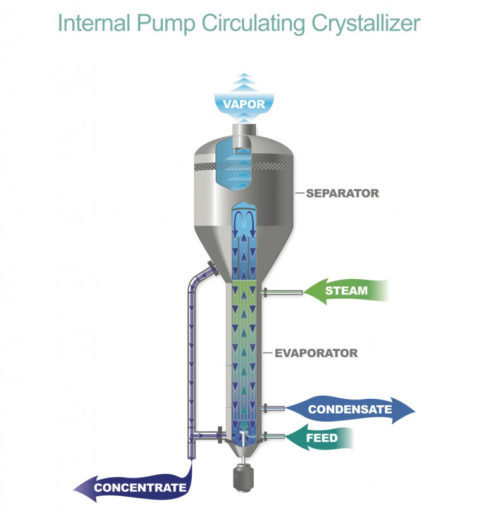 Film evaporators are among the most cost-effective evaporation systems in use today. They also provide very high heat transfer coefficients (HTCs). However, they can have a greater fouling propensity as opposed to forced circulation evaporators, which in turn, limits their effectiveness in some applications.

A falling film evaporator is considered the “most gentle” evaporation system design. A very short residence time and efficient heat transfer are the main benefits of this design and contribute to the perceived “gentle processing” nature of the design. In the operation of a falling film evaporator, fluid is pumped to the top of the heat exchanger and is evenly distributed across the tubesheet and into the heat transfer area. Proper wetting of the heat transfer area is required to maintain the dynamics of the evaporation process. Improper wetting from low flow or maldistribution into the tubes results in dry spots and fouling inside the tubes.

Because of the efficiency of the falling film design, it is commonly used in large systems since the heat transfer required area is reduced and thereby overall system cost. The low difference in steam and product temperature (ΔT) allows for a greater usefulness of the Multiple effect evaporator design philosophy. It is not uncommon to see 5–7 effect falling film evaporator designs. 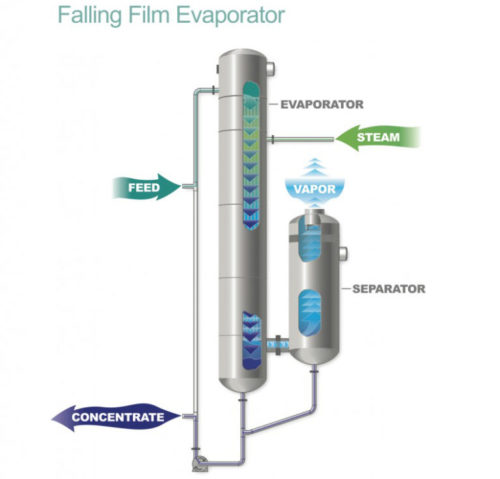 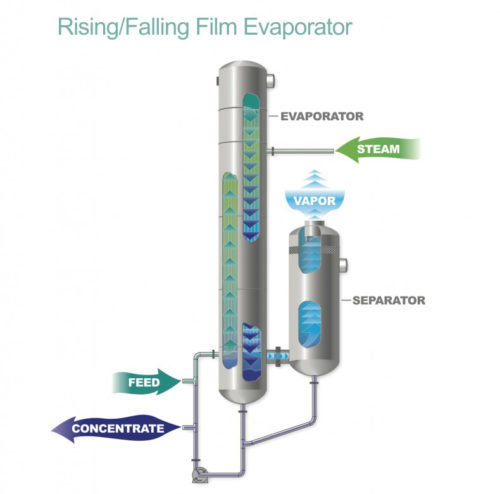 One of the very early “modern” evaporator designs, a rising film evaporator utilizes either a plate heat exchanger or a vertical shell and tubular heat exchanger with process fluid in the tubes. As the liquid boils, it creates a film on the inside of the plate or tube as a consequence of the vapor volume generated. As with any film style design, the resulting heat transfer coefficient makes the design very efficient in terms of heat transfer area required.

This system operates by natural circulation thermo-siphon action and thereby eliminates the need for large recirculation pumps; alternately, it can operate in a single pass as shown below. The upward force of vapor produced by the boiling liquid pushes the rising liquid into a thin film with a great amount of turbulence. The system hydraulics offer an advantage for processing more viscous products. Rising film evaporator are compact designs that offer very simple operation compared to other designs. 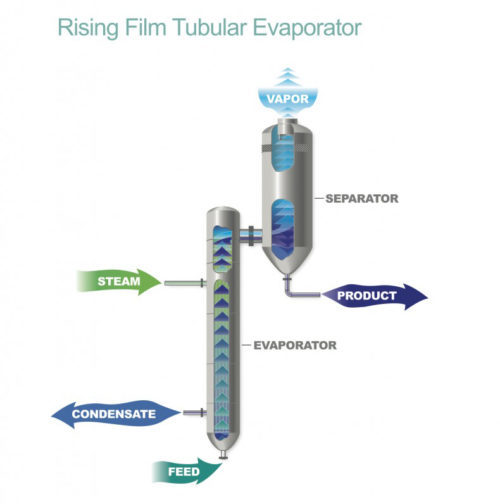 Evaporation is an energy intense process. In the design process, careful consideration must be taken to use a design that is not only appropriate for the fluid being processed but also considerate to energy conservation.

Multiple Effect Evaporation
The entire evaporator duty (amount of water or solvent being removed) can be segregated into multiple evaporator effects. The segregation of the duty is combined with a pressure gradient across the entire evaporator to allow for reuse of energy in the system. The figures below show how the multiple effect design concept functions.

In essence, the steam economy of the system is linear to the amount of effects used in a design. Depending on process limitations, multiple effect designs are typically limited to approximately 7 effects. 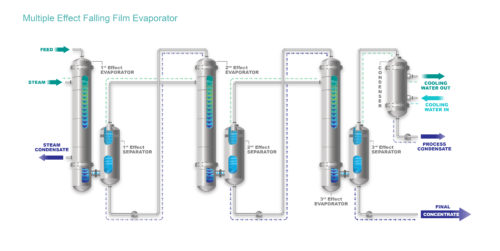 Mechanical Vapor Recompression (MVR)
MVR designs utilize a compression device to increase the pressure of the process vapor and reuse it as the heating medium for the evaporator. Typical mechanical devices used in an MVR design are: centrifugal fans, compressors, and blowers. MVR designs can theoretically provide the efficiency of 100 equivalent effects of a multiple effect evaporator design. The cost of electricity to drive the compression is a factor in the equivalent effect comparison. 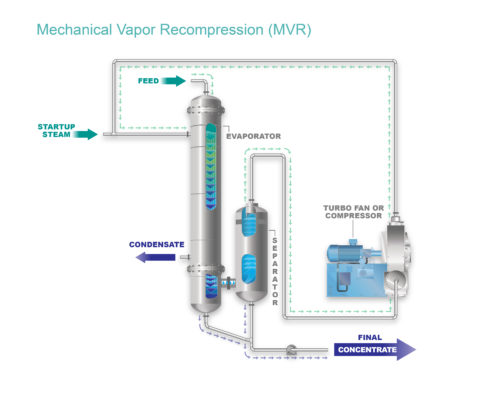 There are two major factors to consider in the material selection process for an evaporation system: corrosion and cleaning.

Evaporators usually operate under harsh environmental conditions. They may process corrosive fluids that may contain chlorides, acidic agents, or caustic chemicals. For that reason, it is imperative that evaporators are constructed from durable and resilient materials.

The following examples demonstrate the importance of material choice:

When sourcing evaporation machinery, it’s important to understand the terminology surrounding the processes and products. The following terms will help you foster an understanding of the evaporation process and the equipment used to facilitate it.

With so many factors to analyze, it may seem very daunting to select a suitable evaporator for your specific industry and application. Thermal Kinetics is here to help you navigate the evaporator selection process from start to finish. We provide a wide-ranging selection of evaporators, industrial distillation equipment, and industrial scrubbing equipment.

If you’d like to learn more about the products and services we offer, reach out to us today to request a quote. 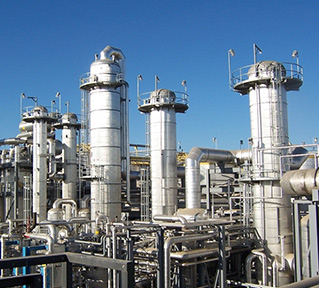 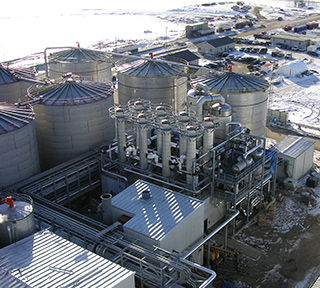 Get a Custom Solution Today

Get a Custom Solution Today